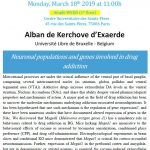 Motivational processes are under the critical influence of the ventral part of basal ganglia, comprising several interconnected nuclei (as striatum, globus pallidus and ventral tegmental area (VTA)). Addictive drugs increase extracellular DA levels in the ventral striatum, Nucleus Accumbens (NAc), and share this ability despite varied pharmacological properties and mechanisms of action. A major goal in the field of drug addiction has been to uncover the molecular mechanisms underlying addiction-associated neuroadaptations. It has been hypothesized that one such mechanism is the regulation of gene expression7, and there have been numerous studies that have documented altered expression of genes in the NAc. We discovered that Maged1 (Melanoma antigen genes d1) has a mandatory role in behaviours related to drug addiction in BG. Mice lacking Maged1 are insensitive to the behavioural effects of cocaine as assessed by locomotor sensitization, conditioned place preference (CPP), and drug self-administration. Electrophysiological experiments in brain slices and conditional KO mice demonstrated that Maged1 is critical for cortico-accumbal neurotransmission. Further, expression of Maged1 in the prefrontal cortex and amygdala, but not in dopaminergic or striatal neurons, is required for cocaine-induced extracellular DA release in the NAc as well as cocaine-mediated behavioural sensitization and acute cocaine effect respectively. This work identifies Maged1 as a critical molecule involved in cellular processes in BG and behavioural models of addiction.

Biography of the speaker:

I initially learned molecular biology and biochemistry during my PhD to decipher the role plasma membrane H+-ATPase in yeast and plant (P.I. Pr André Goffeau). Next, I learned molecular neurobiology, mouse transgenesis, single cell PCR by working on the physiology of nAChRs in NMJ and in catecholaminergic neurons during my postdoctoral fellowship at Pasteur Institute in Paris (P.I.  Pr Jean-Pierre Changeux). For the past 16 years, my main interest is the study of the roles of neuronal populations and genes in pathophysiology of Basal Ganglia (BG), mainly in neuropsychiatric models and in the striatum.  Our program is based on our ability to target and manipulate genetically and specifically the two populations of Striatal Projecting Neurons (SPN) to evaluate their contributions or the contribution of specific genes in SPNs in various behaviors.  Our group was the first to demonstrate in vivo that the SPNs of the indirect pathway of BG has an inhibitory effect on locomotion and drug preference and are necessary for drug sensitization and cataleptic effect of antipsychotic by a proper genetic targeting of this population. I am currently Research Director at FRS-FNRS in Belgium at Brussels.